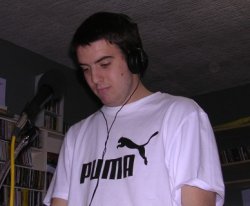 In 1996 Hypnotik Sound discovered the music, thanks to groups as Daft Punk, Cassius, Air or the chemical Brothers.

In 1998, he falls accidentally on the french broadcast called Better Days with Bibi. This weekly rendez-vous allows him to enlarge his musical culture to Garage, Deep House and Old-School musics.

In 2002, always listening to Better Days, He hears Bibi to quote several times the Internet site Universdj.com in his broadcast.

This way, he meets members from the website with whom he made some evenings and memorable broadcasts radios. Hypnotik Sound is also an active member of this association.

On another hand, Hypnotik Sound is also interested in the others music style as reggae, rock, trip-hop, jazz which will drive him to animate several radios broadcasts in various stations of in a place of France called “La DrÃ´me”…

More infos about Hypnotik and others mixshows are available on Univers DJ !

One thought on “Biography : Hypnotik Sound”